Feel free to reproduce this content
but please credit Lakestay.co.uk

In October 1957 Britain spread a plume of radioactive contamination into the atmosphere from a nuclear reactor fire at Sellafield.
Having helped the US Manhattan Project develop the atom bomb at the end of the Second World War, the British government felt it had to develop its own A bomb to be able to stay “at the Top Table” as a world power. The Americans had refused to allow Britain to have the weapons technology its own scientists had helped develop.

Without any reference to Parliament great energy was poured into producing a British bomb. (The first time MP s were told officially was through a brief announcement in 1947)

One key requirement were reactors to burn uranium and produce plutonium. It was decided to use an old ammunition factory at Windscale (now called Sellafield). The site had plenty of cooling water from Wastwater lake and was remote from population in case of any accidental nuclear incidents. At a time of post war austerity two huge heavily shielded reinforced concrete “piles” were built at break neck speed and by 1950 the piles were operating. Alongside the first nuclear reprocessing plant (B204) had also been built to extract the precious plutonium.

It was in February 1952 that the first salmon tin sized billets of plutonium were ferried south in the boot of a taxi to the new Aldermaston weapons factory near Oxford. Britain’s first A bomb, code named Hurricane was detonated off the cost of Australia in October 1952. These early plutonium reactors were crude affairs with the main objective being to get the weapons material as quickly as possible. Each “pile” was a honeycomb of carved graphite blocks. Hundreds of horizontal channels ran from the front (charge face) of the reactor to the rear discharge face. Some 35,000 aluminium cans of uranium were pushed into these channels to assemble the critical mass for the chain reactions to burn away.

As theygenerated the intense heat and neutron flux of a nuclear chain reaction some of the uranium converts into plutonium. The fuel cans which had undergone this fiery transformation were a few weeks later pushed through to drop out of the discharge side of the reactor. They then travelled by a mini boat along a water duct into the adjoining reprocessing plant. All this had to take place behind several feet of concrete shielding to cut down the intense penetrating radiation. Each reactor weighed a total of 57,000 tonnes. Because the graphite could release its own latent heat suddenly and unexpectedly the entire reactor had to be deliberately heated up to aneal the graphite. 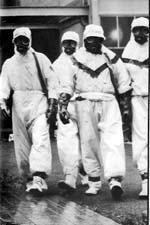 On October 8, 1957 a technician was heating up the reactor to release this so called Wigner energy. Because of the inadequacy of the temperature measuring instrumentation the control room staff mistakenly thought the reactor was cooling down too much and needed an extra boost of heating. Thus temperatures were actually abnormally high when at 11.05am the control rods were withdrawn for a routine start to the reactor's chain reaction. A canister of lithium and magnesium, also in the reactor to create tritium for a British H bomb, was probably the first can to burst and ignite in the soaring temperatures. This coupled with igniting uranium and graphite sent temperatures soaring to 1,300 degrees centigrade.

These early plutonium "piles" were cooled by massive fans blowing air through them. The heat and some contamination was then carried up the famous concrete chimneys that are such a symbol of the Sellafield skyline. As the fire raged radioactivity was carried aloft. Blue flames shot out of the back face of the reactor and the filters on the top of the chimneys could only hold back a small proportion of the radioactivity. An estimated 20,000 curies of radioactive iodine escaped along with other isotopes such as plutonium, caesium and the highly toxic polonium.

In the days that followed a dangerous cloud of 'fallout' was carried in a south easterly direction towards cities in the North of England. The scientists were unsure how to deal with the raging fire. Workers were sent in relays to use scaffolding poles to frantically push out hundreds of fuel cans to try and make a fire break around the fire. Then they tried to pump in carbon dioxide gas to try and smother the flames, but the heat was such that oxygen was produced from the gas and thus fed the flames higher. The scientists then had to gamble on flooding the reactor with cooling water. The risk they were aware of was that explosive hydrogen and or acetylene gas could be created and then flash over into an explosion. As this critical decision was being taken the temperatures were climbing by 20 degrees a minute.

Luckily the gamble paid off and the water starved the fire of oxygen and the reactor was brought under control. Yet even today as the fateful chimneys are slowly taken down by shielded robots the centre of the fire crippled reactor of Pile one still contains molten uranium and still gives off a gentle heat. There is still unreleased Wigner energy in the graphite and water hoses are still left connected to the charge face as a final safety precaution.

The official National Radiological Protection Board estimated in a 1987 study that at least 33 people are likely to die prematurly from cancers as a result of the accident. (note from EFN : it should be noted however that this estimation is a theoritical calculation - no dead bodies have been seen - this figure of 33 is based on the hypothesis of an increase in cancers calculated with the linear no-threshhold theory, but this hypothesis is proven to be false and should not apply at such levels of radiation).

(Pictured are the concrete pile chimneys and radiation workers at work at Sellafield some time after the fire incident.)